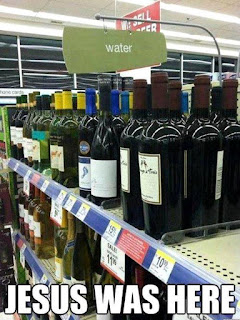 The Scripture Reading this week is John 2:1-11

The Sermon Title is More than Enough...

Instead of giving in to the panic (some commentators suggest that this wedding was in Jesus' family, why else would his mother be worried about the lack of wine?  some even go so far as to suggest it is Jesus' wedding) Jesus' mother assumes that the problem will be solved.  And Jesus obliges, even though he seems dubious that this is the place and time for a miracle.

Most sermons I have heard on this passage have focused on how the episode reveals Jesus in his power and majesty.  And that is a possible line.  But most times I have preached on it I have been struck by that amazing abundance when everyone else is worried about running out.

It strikes me that this is a common issue in many people's lives.  We become convinced that we are running out of something and react in panic.  I also wonder how many of those guests who had heard that the wine was gone were skeptical when they heard that not only was the wine NOT gone but the best quality stuff was now available in amounts beyond what they could possibly drink.  When we are convinced that something is scarce then hear that indeed there is plenty are we willing/able to believe it?

WE live in a culture that needs us to believe things are scarce.  We follow the One who promised us life, and that in abundance.  Which will we choose to believe?
--Gord
Posted by RevGord at 12:13 PM