In the seasons of the Church Year the 12 Days of Christmas begin on December 25th and go until January 5th, the day before Epiphany. Epiphany is a feast where we remember the story told by Matthew about the Magi visiting Bethlehem. It is common in some churches to celebrate Epiphany on the Sunday preceding it, which we are doing this week.

The Scripture Reading will be the story of the Magi and what happens after they visit. You can read it in Matthew 2:1-23

Early Thoughts:  Such a warm story, uplifting, joyous -- until it isn't. Where there is light there is a shadow.  Maybe that is why we need to find another road.

The birth of Christ, of the Word made Flesh, means that nothing will ever be the same again. In some way the Herods of the world know this to be true and so they strike out. Which means we may have to return home by another road. It also might mean we need to weep and wail for a time.

The basics of this story are well known.  Matthew tells of visitors, wise men from the east, who come searching for a new king. They visit the current king in search of information. They end up in Bethlehem in a house with a young child (up to 2 years old to judge from the later events in the story). They produce rich gifts and then go home by a different path, choosing not to inform the current king where the child is.

Then it gets less cheery. The child's parents are warned to run for their lives, and so they head to Egypt. They seek refuge in a strange land, fleeing from certain death, never to return. Sadly the king is not worried about finding the right child. So he orders the death of any possible pretenders to the throne. Later the child and his family, wary of the king's son, return to a different place where the child will grow up, to emerge into public life some decades later.

The Epiphany story, in full, pushes us to ask hard questions. It is nice to think of "what a wonderful event this must have been that people came form far away to give this young child such rich gifts". But, as we have shown, that is only half the story. I think we need to focus on the rest of the story.

Herod felt threatened. Herod struck back in a murderous fashion. And the Holy Family became refugees, never to return home (in Matthew's story we have no reason to believe that Mary and Joseph were not originally from Bethlehem). The world was changing and Herod wanted to keep that from happening.

What does Christmas threaten in our world? Who are the Herods of our day? How are they reacting to changes that threaten their comfort or their worldview or their position? Where are we in that equation? Who is forced to seek refuge because they are part of the change that is happening?

I find these to be hard questions. Partly because I suspect sometimes we are striking out against the change that God is bringing forth in the world.  Partly because change is challenging. Largely because I am not convinced there are clear-cut easy answers.

But there is one line that echos in my soul in this story. It comes from the middle, as we transition form joy and worship into fear and murder and flight: " they left for their own country by another road". The Magi make this choice out of fear for the child (and possibly themselves). Why might we need to find another road? Maybe we do it out of fear. Maybe out of desperation. Maybe because we have changed where we think we are going?

What road will we take into the post-Christmas world this year?
--Gord
Posted by RevGord at 11:13 AM No comments: 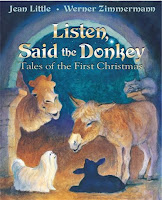 This evening's service will conclude our "Stories of the Season" series. We will be hearing a number of stories from the book Listen, Said the Donkey.

There is a legend that on Christmas Eve the animals can talk using human speech. The Carol The Friendly Beasts grows out of this legend, as (it seems) does this book.

We will hear the Christmas story (including the visit of the Magi so the Epiphany story as well) from the point of view of a Donkey, a Lamb,  a Cat and a Dog.

Then we will hear how Scripture tells those stories as we read:
Interspersed with all these stories we will sing carols, we will hear special music -- choir and solo and handbells, we will pray. At the end of the service we will take part in spreading the Light of Christmas with our candles.

Please join us to hear the old story in a new way!

Posted by RevGord at 2:11 PM No comments:

Email ThisBlogThis!Share to TwitterShare to FacebookShare to Pinterest
Labels: Christmas, Stories of the Season 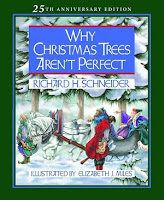 This week in our "Stories of the Season" series we will be reading Why Christmas Trees Aren't Perfect, which is a story about self-sacrificing love.

The Scripture readings this week are:
The Sermon title is Evergreen Love.

Early Thoughts: I think love is a verb, not a feeling. For those of us who follow Christ it is also a commandment, a way of living, a Rule of Life. It is part of being Christ-like.

More specifically we are called to love our neighbours both the ones we like and the ones we don't like (I would point out Jesus never commands us to like anybody) which, if love is a verb, means to act lovingly towards them. We are called to give of ourselves for the benefit of others.

We are able to do this, however imperfectly, for one reason. We are able to love and give of ourselves because we have been loved in this way. Giving of ourselves, in whatever way we are able to do so, puts arms and legs on the rhetoric of love. It means we have pushed aside the fear of loss and giving up in the service of our neighbour.

Isn't this what Jesus models? Isn't this what the Incarnation accomplishes? Jesus comes to live out love, and in the end Jesus' commitment to living out of love and proclaiming the power of the Kingdom will lead him to the cross.

Our story this week is about a pine tree who gives up on looking perfect to be closer to perfect in a different way. I believe we have many voices telling us what we ought to be in the world. Christ may challenge us to set aside some of those ideals in the service of a higher cause.

PS: when I chose the sermon title I was thinking of the love theme from the movie A Star is Born (the Kris Kristofferson and Barbra Streisand version) which is called Evergreen. Really it is a classic romantic love song but some of the lines fit with this week's service:


Like a rose under the April snow
I was always certain love would grow
Love ageless and evergreen...
Morning glory and midnight sun
Time we've learned to sail above
Time won't change the meaning of one love
Ageless and ever evergreen

This Sunday will be Pageant Sunday, with our home-written pageant Bethlehem Debunked.  The Youth Group and Sunday School will lead us on an exploration of what the Christmas story tells us.

Before and after the Pageant itself we will hear an excerpt from The Best Christmas Pageant Ever. (Choice of book is no comment on the Pageant we will see)
Posted by RevGord at 9:30 AM No comments:

Email ThisBlogThis!Share to TwitterShare to FacebookShare to Pinterest
Labels: Advent, Stories of the Season 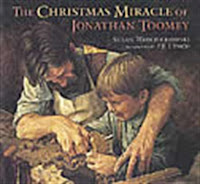 The Scripture Readings are:
The Sermon title is Hope in the Face of Despair

One of the traditional themes of Advent is HOPE. Christian hope is not intended to be pollyanna-ish. It is not a false hope that pretends the hard things aren't real. Our hope names the hard things for what they are, but looks beyond them to see where God is in the situation. What is God doing in the midst of this mess? What might God have waiting after God walks with us through the mud?

Our passages this week speak to this hope. Isaiah talks to people in exile and offers words of comfort and promise. Jesus speaks to those carrying heavy burdens and offers rest (this verse was used to dedicate the bench outside our building). Revelation offers us a vision of the Kingdom of God in full flower.

This week in worship we will take time to hang cards of memory on a tree as we carry our memories into the rest of the Christmas season. Part of how we name our reality and live into hope.

If we let it, despair can claim a large piece of our lives. But we are people of hope. We are not alone in times of struggle. And there is light beyond the shadow. WE await the birth of a child that shares the promise of God for comfort and presence. God can move in our lives bringing hope that stands in the face of despair.