The Scripture readings this week are:
The Sermon title is Called to be True

Early Thoughts: What does it mean to let our light shine (or let God's light shine through us)? How do we know if we have lost our saltiness?

A couple of weeks ago I asked the sermonic question "why do you give?"  One answer I suggested that day was that we give in response to knowing that we have been blessed.

One way the church used to get people to give was to foster a sense of obligation or duty (or possibly guilt). And for some generations this was effective. Many people suggest that this is not a strong incentive anymore.

In our world these days people want to know that their gifts make a difference. Think of how many stories get published each fall (in what I tend to refer to as "please give to our charity" season) discussing which organizations have the best record in terms of administrative spending.

Which brings us to letting light shine through us, and remaining salty and zesty.

Centuries ago a theologian said that we are now the hands and feet of Christ: 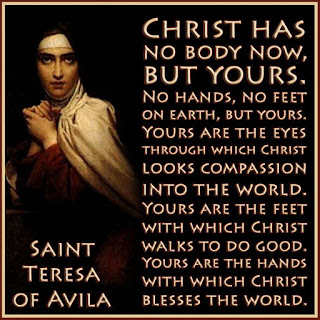 When we let God's light shine through us, when we intentionally set out to be salt to the world we make a difference. We show that change is possible. We show that we are committed to the ministry to which God has called us. And that makes it more likely that others will see something worth sharing in.

Let us not hide the light. Let us not lose our saltiness. Let's remain bright and zesty.
--Gord

The heart of the year is approaching. The reason we gather is soon to be celebrated. The holiest week of the Christian year, a time when we move from triumph to betrayal to death. And then, as a surprise, LIFE. Life wins!

God sent his son They called him Jesus
He came to love, heal and forgive
He bled and died To buy my pardon
An empty grave is there to prove my Savior lives
(verse 1 of Because He Lives by Bill Gaither)
Our hope lies in a story that defies description. Our hope for the future lies in the story of an empty tomb, a crucified and raised Chosen One of God. In some ways it makes no sense. In many ways it makes no sense. Jesus proclaims the coming of the Kingdom and our hope is in an empty cave in a garden outside Jerusalem?

Because he lives I can face tomorrow
Because he lives All fear is gone
Because I know he holds the future
My life is worth the living just because he lives
(chorus of Because He Lives by Bill Gaither)
Every year as we approach Easter it is easy to believe in the power of those who crucify. The power of the powers and the principalities to defy the promise of the Kingdom seems unquestioned. This year is no different.

This evening, less than a month before Easter, as I sit and type this out, the news has stories of the FBI investigating possible Russian involvement in the 2016 US election. There is still a civil war devastating Syria, one that has caused the largest refugee crisis in Europe since the Second World War. Last week a US court once again accused the White House of trying to ban people from entering the country based on their religion. And that is just a start.

As Bill Gaither says: Because He Lives.

Because God doesn’t give up. Because God looks at the worst the world can do and then says “My turn”. Because God is active in the world the cross is overturned, Jesus is raised, and Life Wins. And that means we have hope.

How sweet to hold A new born baby
And feel the pride And joy he gives
But better still The calm assurance
That child can face uncertain days because he lives
(verse 2 of Because He Lives by Bill Gaither)
In many eras of human existence people have wondered if it makes sense to bring children into the world. As a race we have wondered if the world is a safe place to raise children. But as people of faith the answer is that while parenthood may be a terrifying concept at times we trust that all will be well in the end. Because God has raised Jesus, because life wins, we can all face the uncertainty of life.

Because he lives I can face tomorrow
Because he lives All fear is gone
Because I know he holds the future
My life is worth the living just because he lives
(chorus of Because He Lives by Bill Gaither)
We are people of hope, we are people who trust that Love and Life conquer fear and death. Easter is coming. God is still active in the world. Resurrection brings hope and promise. Jesus lives. And so we keep on living, walking with God into the future.

Blessed Easter.
Gord
Posted by RevGord at 9:44 AM No comments:

The Scripture reading for this week is Luke 15:1-32

The Sermon title is Lost and Found

Early Thoughts: What makes something (or someone) worth finding?

These three parables suggest that God might answer that question differently than some of us.

Suppose you have 100 sheep and one goes missing. What fool would leave the other 99 alone in the wilderness (therefore in danger) to find the lost one -- who is likely dead or injured anyway?

OR...
You have lost 10% of you money.  Surely it makes sens to do everything that you can to find it. But then to celebrate finding it by having a party -- and therefore spending what you just found?

OR...
You have 2 sons. One of them violates every norm of politeness and parental respect by claiming his portion of the family's wealth before you are even ill, much less deceased. Then when he comes back you abandon all sense of propriety by running down the road to greet him. Then you abandon all sense of fiscal management by giving away property (robe and ring) that theoretically now belongs to the  elder brother (when you eventually die) and by throwing a party that involves killing a prized animal -- and forget to send someone to the fields to invite the elder brother. Then you tell the elder brother [who is having a very understandable temper tantrum] to get over it and come on inside.

Robert Fulghum, in a story in one of his books, suggests that sometimes we get lost on purpose -- only we call it hiding. And then we sometimes hide so well that we get mad when people seem to stop looking for us. Fulghum also suggests that we try the same thing with God.

But of course the witness of Faith and of Scripture is that God doesn't stop looking. Or God never stops waiting for us to "come to our selves" and decide to stop being lost/hiding. And then there is a party! There is always a party!

This is Grace. This is Redemption. This is Hope.

Thanks be to God, the one is is always seeking.
--Gord
Posted by RevGord at 11:13 AM No comments:

This year in Lent we are taking some (well many) of the Sundays to talk about Stewardship. The theme of the Stewardship resource we are launching from is Salt and Light.

Early Thoughts: How are you Blessed? How do you share your blessings?

I suspect we might answer that first question differently than Jesus...I mean look at those first few verses of Matthew 5 (the beginning of the Sermon on the Mount as it happens). DO those sound like reasons for blessing?

And that is the first step in being salt and light to the world.

In a couple of weeks we will talk about the salt that has lost its saltiness and the light that is hidden. This week we need to ask how we share the blessings God lays before us.

WE are called to share those blessings. The early church had a particular understanding of what that might mean, as they attempted to live as a communal organization -- everybody contributing what they had for the benefit of all.

Stewardship is, according to one definition, everything you do after you say "I believe". Stewardship asks what we do with the gifts that flow to us. A big part of how we handle those gifts lies in out attitude...

If we believe the narratives of the world around us, stories that lead us to be fearful and anxious, tales that tell us to watch out for ourselves, our stewardship might be marked by defensiveness and wall building and protecting what (little) we have.

Or we could believe the narratives of faith, stories that tell us we are blessed, tales that tell us not to worry (as folks were reminded on Sunday March 12 with a reading from Matthew 6). Those narratives lead us to a place of greater ease of mind, a place where it is more natural to offer what we have for the service of others.

We are called to be salt and light.

God seeks to restore flavour to lives that have grown tasteless, to shine the light that can not be overcome into the dark places. God challenges us to be the hands and feet that help to make that happen.

WE share the blessing of life. We share the gifts we have been given to help God's mission to flourish. What do you have to share?
--Gord

Posted by RevGord at 3:52 PM No comments: