The Scripture Readings this week are:
The Sermon title is 10 Simple Rules for Living in Community 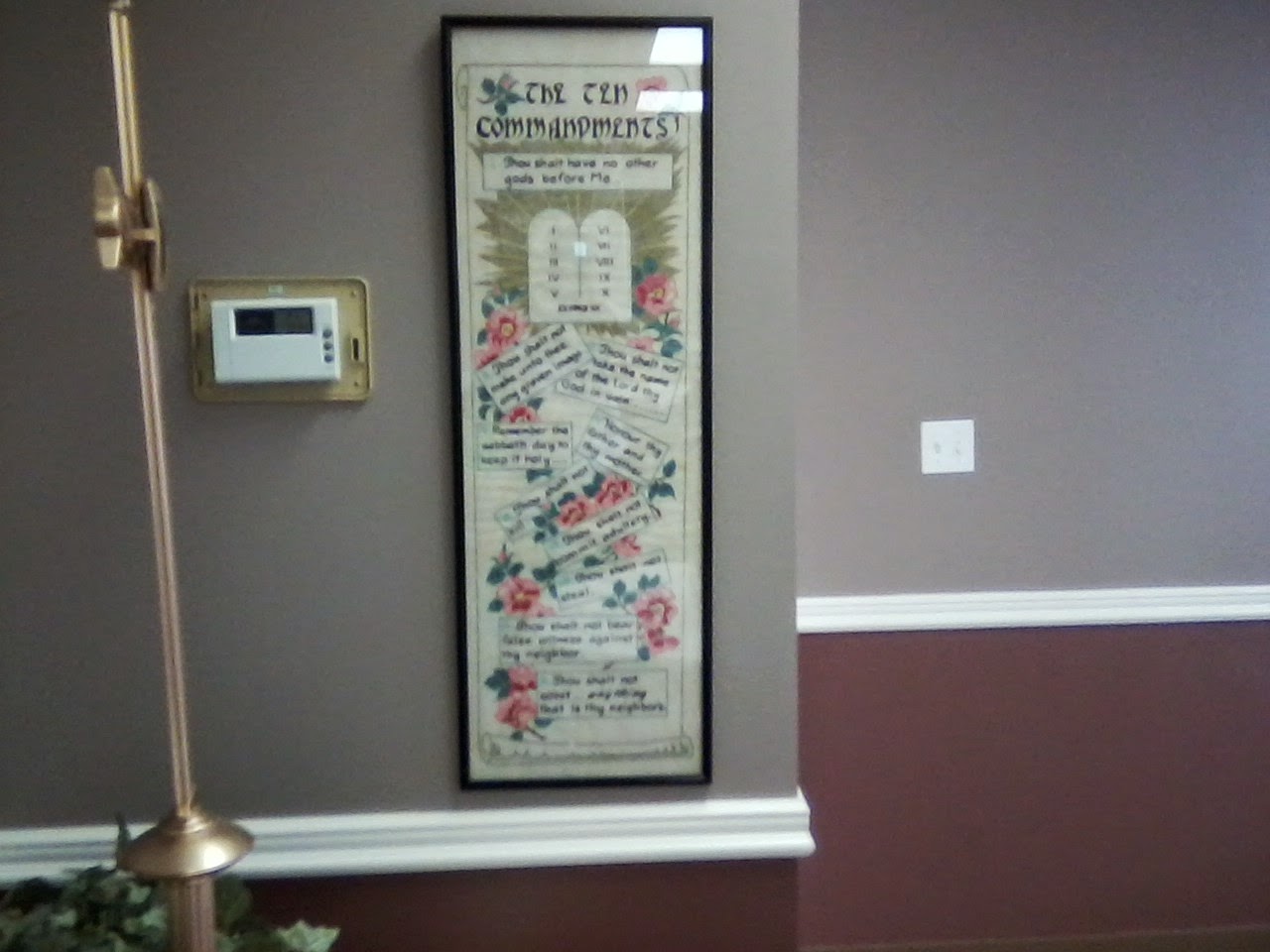 Early Thoughts: Living in community can be hard.  That's why we have rules.

The 10 commandments are a central part of how we, as a covenant community, understand what it means to live with each other and with God. It is a matter of great debate how much they impact our civic legislation, because many of the precepts we find in them, particularly the last 6 which talk how we treat our neighbours, are found in law codes from other areas (such as the law code of Hammurabi).  So maybe some of these are truly universal, and not a result of Judeo-Christian thought...

But we live in an era that seems to chafe at rules.  Well sort of, we routinely click OK on terms and conditions of websites without reading or questioning the rules and regulations and permissions they include.  But rules tell us what we can't do, and the idol of personal freedom and independence tells us that we should be able to do whatever we want.  (Admittedly this plays out differently in different generations and at different ages)

DO we still think rules are important?   And if so why?

Jesus tells us that he comes not to abolish the law but to fulfill it.  Christian freedom does not get rid of the rules (if anything Christian freedom places more restrictions as Jesus goes on to say in the Sermon on the Mount).  If we are going to live in community we need to name that without rules we have anarchy.  And anarchy means the weakest among us will be left on the figurative ice floe to drift away and die.

So how do we live in community?  How do we deal with the need both to have rules about how we live and the need to challenge/discuss those rules to ensure they are accomplishing their purpose (or to ensure that purpose is worth accomplishing)?  This week we will have a bit of that discussion, using the "Big 10" as our starting point.
--Gord
Posted by RevGord at 11:12 AM No comments:

The Sermon title is Does God Take Sides?

Early Thoughts:  It is a truth that the God we meet in parts of scripture isn't always the God we talk about in the 21st Century.  For much of the story in the Hebrew Scriptures God is NOT the ruler of the whole world, YHWH is a family/tribal/national God.  And like in much ancient mythology God takes sides, God fights for God's people (and in later parts of the story it could be interpreted God chooses NOT to fight for God's people to teach them a lesson), God protects God's people, God defeats the enemies of God's people.

I am not sure it is.  My experience and understanding of God goes far beyond protection of my tribe/nation.  And yet we regularly hear of sports teams praying that God would be on their side.  And there is a long tradition in multiple faiths of people going to war in God's name -- a tradition which continues to this day.

So does God take sides?

I defer to the wisdom of Abraham Lincoln who pointed out that the important question was not whether God was on our side but if WE were on GOD's side.

But still I think it is important, as people who live in covenant, to remember that God is there to support and protect--and challenge--us.  There is comfort in knowing that, as the United Church Creed strongly proclaims, We Are Not Alone.  Even when the murdering hordes are thundering across the plain and our backs are to the sea God is there.  Maybe not to wash away all the threat.  Maybe to challenge our understanding of whose side we are on.  But God is there.

A reminder that both Sunday School and Youth Group start this Sunday.  So does Junior Choir.

The Scripture Reading this week is Genesis 12:1-9

The Sermon title is Whose Land is It Anyway?

Early Thoughts:  In his novel Exodus Leon Uris describes the area we now call Israel, Palestine, and Jordan the "twice promised land".   And that is just in the era that the British were in charge of the area....

God says to Abram, "Get up and Go!".  God promises to lead him to a land where he will have many descendants who will be a blessing to the world.

Great plan.  Only problem is --- there are already people living there.  So it always has been, not only on the eastern shores of the Mediterranean, but many other places in the world.  So how do we know whose land it is anyway?

For most of human history the land has been the basis for wealth and power.  That changed a bit with the Industrial Revolution, as many British noble families learned the hard way.   To have land means you can utilize the things the land produced, and sell the surplus for cash to get other stuff.  To have land has often meant you had a population of serfs/villeins/slaves/sharecroppers you could use as either a labour force or a fighting force.

Land is important.  Land is life.  Land is future.

But most often land is also occupied by somebody else.  Then what?

In the Middle East we still have battles over the "twice-promised" land -- just last month there was an uptick in the violence.  Whose land is it?

I would argue that "Whose land is it anyway?" is a question that we as Canadians need to feel pretty sharply as well.  Because it is only when we ask ourselves that question and look at all it means to talk about land that we will seriously start to work on rebuilding our relationship with the descendants of the people who lived on THIS land when our descendants arrived on these shores.

15 years ago we had a lot of talk in the church about the Jubilee year and the forgiveness of national debt.  Part of Jubilee is also returning ancestral land to the "proper" owner (which in Deuteronomy and Leviticus means the Tribe/Clan/Family of Israel that the land was given to after the conquest--not the Canaanites who were there before Joshua led the people over Jordan).  I remember a couple of people in the congregation where I was serving my internship note that we did not talk nearly so much about that aspect of Jubilee in the Canadian church.  I wonder why that was so true.....
--Gord
Posted by RevGord at 11:51 AM No comments:

This being the first Sunday of September we will be celebrating the Sacrament of Communion.

This Sunday is also the first Sunday we are following the Narrative Lectionary.

The Sermon title is A Promise in Many Colours

Early Thoughts: Technically it is the result of light rays bending through a prism and being scattered into different wavelengths.  But that is hardly romantic....

Topic of songs about what is somewhere over them.   Symbol of inclusivity in the Pride Parade.  Scientific experiment.  And sign of the promise.

The story of Noah and the flood is one that many of us learned in early childhood.  And yet how many of us remember the part about the rainbow?  Yes we know about the animals going in 2 by 2.  But I suggest the longer term lesson is the rainbow.

God gives up on the world, God decides to wipe the slate clean and start over.  But then God appears to decide this was the wrong approach.  After the flood and the destruction God says "Never Again" and the rainbow is that sign of that promise.  No matter what happens, no matter how far we wander from God's hope, never again will the world be washed away in a flood.  God will stick with us, not try to replace us.

A promise in many colours, a sign of hope, a constant reminder of God's presence in the world.
--Gord

And here is my favourite rainbow song:

Posted by RevGord at 9:25 AM No comments: