This being the first Sunday of November we will be celebrating communion.  As well, because it is a First Sunday, our 2nd Offering for Local Outreach will be received.

The Scripture reading this week is Luke 19:1-10

The Sermon title is Life-Changing

Many of us learned the story of little Zacchaeus as children. We learned how he was too short to see through the crowd so he climbed a tree (something many children can appreciate at things like parades). And we learned a song:

After Jesus invites himself for supper Zacchaeus makes a bold statement about how he will (or possibly already does -- the verb tenses in Greek are actually in the present) live as justly as he can while being a tax collector.

The hope is that Jesus makes a difference in the world. Both at the systemic level and at the personal.  When we meet God at work in Jesus we need to be open to being changed.

Are we ready to take that chance?  Are we ready to let Jesus see us (Zaacchaeus' attempt to see Jesus leads directly to his being seen by Jesus) and invite himself into our lives? Are we open to our own come to Jesus moment?
--Gord
Posted by RevGord at 2:55 PM No comments:


The Sermon title is Confession – Good for the Soul? 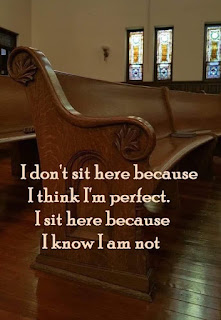 Early Thoughts: It is challenging. It is sobering. But it is vital. We have to be honest with ourselves, with each other, with God about who and what we are. Only then can we really move forward into who God is calling us to be.

For all of Christian history the practice of confession has been central to living out the faith. Some people chafe against it, saying we should not be encouraged to be so "down". And indeed sometimes the encouragement to confess has been done in such a way that it sounds like encouraging folk to think they are worthless. We can go too far in naming our own shortcomings.

But the other side is that we start to think we are "holier than thou" -- see the Pharisee in this week's Gospel reading. And than is not a path to growth.  It is, however, a path to be labeled as hypocritical.

The core of the Christian Gospel message is that we are all beloved by God. Very close to the core is that we are forgiven by God (which is a big part of being loved just as we are). We are not perfect. None of us is.  Some days we come closer than others at living in God's way. Some days we miss the mark big-time.

Confession is indeed good for the soul. Just remember that we are also forgiven.
--Gord
Posted by RevGord at 11:52 AM No comments:

Email ThisBlogThis!Share to TwitterShare to FacebookShare to Pinterest
Labels: Church in the World, Scripture, Season After Pentecost, Sermons

The Scripture Readings this week are:
The Sermon title is Persistent Earworm of Justice

Early Thoughts: Have you ever had an earworm? That bit of music that just will not leave you alone. I remember a Big Bang episode where Sheldon had an earworm and he was convinced it was going to drive him crazy (which admittedly may not be a long trip).

Would you believe there is even something called The Earworm song?

This week's Gospel talks of a persistent widow who will not leave the judge alone until justice is done. And to be honest the judge does not grant her request because of justice, rather he gives in so she will leave him alone. Sometimes the end does justify the means.

Luke has Jesus telling this story to show that if even unjust judges give in to requests, how much more will God (who is just) respond to requests made in prayer. But when I read this story, which I have read many times before, this week in conjunction with the Jeremiah passage about the new covenant being written on our hearts and 2 Timothy's exhortation to persist in proclaiming the word I saw a different tone.

Most of the time we find an earworm terribly annoying. But it is sticky. Something about that bit of music sticks with us, at least for that hour or day. Shouldn't God's word of love and justice be just as sticky? And when we (as we often do) forget to live out those words shouldn't there be someone reminding us?

I admit, it seems odd to describe the word of God as an earworm. But the God who has written the covenant of love and justice on our hearts, the God who challenges us to be persistent in proclaiming the Kingdom, the God who is always with us is not about to let us off easily. God is whispering in our ears that we would do what is just and right for the rest of the world. Will we listen? (Even if only in the hopes of silencing the whisper for a while)
--Gord
Posted by RevGord at 3:09 PM 1 comment:

The Scripture reading this week is Isaiah 55:1-13

The Sermon title is Go Out with Joy

Early Thoughts: An unusual Thanksgiving reading. But one that speaks to the abundance God provides, and what better topic is there for Thanksgiving?

It is my belief that when we change how we see the gifts that fill our lives each day we change who we are, we change how we interact with the world. In short we are transformed to be more like who God would have us be.

God is at work in the world. God sends gifts to the deserving and the undeserving. God calls us all to the banquet, to eat and drink without money. For that we give thanks. In our thankfulness we can go out with joy, sing songs of thanks (along with the mountains and hills?), and clap our hands (along with the trees of the field?)

This Thanksgiving weekend I encourage all of us to remember the blessings in our lives, to remember that we have been gifts from God, to sing out our thanks for those gifts. But more than that I encourage us to open ourselves to the transforming work of God as we decide what we will do out of our giftedness.  And as I do every Thanksgiving season I think of this classic hymn:

PS: There is a hymn in Voices United taken from Isaiah 55 (page 884). Here is the Gaither choir singing it 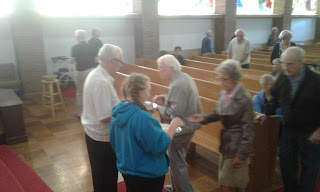 On the first Sunday of September we had communion, as is our custom on first Sundays. As I came up in the line to be served I was struck by the sight of Gord Pearcy and Sarah Waldie paired up to serve together. The pairing was so meaningful to me that as I returned to the chancel I took a picture of it. When I posted that picture on the St. Paul’s Facebook page I described it this way: “One of our long time members serving communion alongside one of our most recent members “. To me that speaks to a big thing the church has to offer – one I have yet to see appear in Sharon’s “I go to church because...” slides.

I have long believed that we are healthier as individuals and as a society when we have relationships that cross generations. Since I was sure I had seen articles supporting that belief I put the phrase “benefits of intergenerational relationships” in Google and it returned about 5 690 000 results . Intergenerational relationship give chances to teach and to learn (flowing both ways). They help with understanding and breaking down stereotypes. They provide a chance to pass on corporate memory. They help people deal with the ups and downs of life.

There was a time, I believe, when most people had ready access to intergenerational relationships. Often these were within a family unit as fewer people moved far from home. That is no longer true. While there are certainly some families that can regularly have 3 or 4 generations (some can even do 5) gather together there are a lot of families where such a thing can only happen with a lot of travelling. And even within our communities we tend to divide naturally along generational lines. We tend to gather with people of common interests and activities, people in a similar phase of life.

Then there is the church.

One of the first songs I remember learning in Junior Choir 40+ years ago was We Are the Church. The last verse says “I count if am 90. Or 9 or just a baby.” Church events (be that worship or fall suppers or potlucks or camp-outs) are times where people from a variety of ages are in the same space together. Our daughters have never lived in the same community as any other family. They have visited family frequently but never lived where they could go a drop in on Grandma just because.

But there is the church.

Our girls have always had a surrogate family. When we were in Atikokan there were a number of people they referred to as Grandma or Uncle (here they just know people by name). Most of those were from the church community. They have benefited from having surrogate family who love and care for them. As infants and toddlers they would accompany me to services at seniors centres (and sometimes still do) where their mere presence brightened the eyes of some of those residents. They have heard stories told. And now as they get older they share learning with others – as I think of the many times Sarah has helped walk Linda through the setting up of the powerpoint.

It is important to have people of all ages who care about and love each other. We learn so much more about life that way. In Grande Prairie we have a lot of people who have left family behind. One of the things I think we can offer is surrogate family. Indeed that is one of the things I mention to most of the families who come to us for baptism. We need places where generations mix. It won’t always be easy, we will have conflicting priorities at times. But we can and should do it. Because we do count when we are 90, or 9 or just a baby.
Gord
Posted by RevGord at 9:17 AM No comments: